If you pay close attention in the wake of a severe storm or tornado, you’ll likely see houses undergoing repairs — the telltale indicator being roofing and siding material sitting in the yard. But the keen observer will notice these materials often stay in one spot month after month, with no work completed. This sort of home repair delay seems to be specific to severe weather aftermath.

Why does this happen?

The answer is storm chasers.

“Storm chaser” is the industry term for repair companies and contractors who travel from storm zone to storm zone across the country, taking insurance checks to repair damaged homes and businesses.

To the average homeowner, storm chasers may seem to offer an excellent deal. In the wake of a storm, most local businesses are overwhelmed with contracts and storm chasers will help complete the excess work, seemingly helping homeowners to accomplish repairs quickly. These companies commonly offer storm-specific repair services, including:

Plus, the nature of their operation means they are especially experienced dealing with insurance companies that fight to avoid payouts. They are often dedicated to assisting customers in receiving their insurance checks. But if this all sounds too good to be true, that’s because it is.

How Storm Chasers Take Advantage of Home and Business Owners 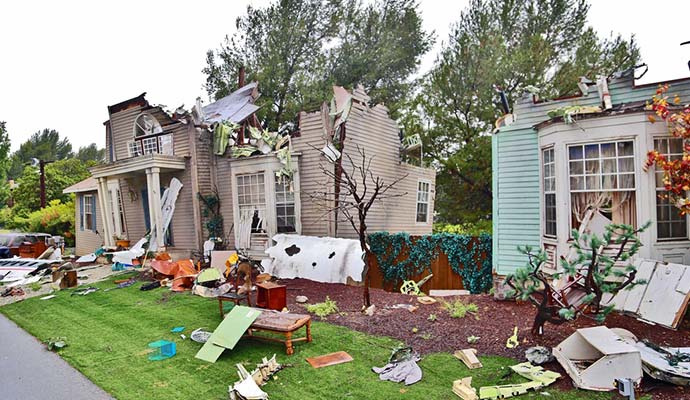 Storm chasers inherently have an advantage over customers because market demand tilts in their favor. While their salespeople may pitch a heavenly deal, their business model is to do the least work for the highest price while using the cheapest construction materials.

Many of these companies promise warranties, but refuse to follow through on their end of the bargain — whether through obstruction or flat out denial.

To make matters more difficult, storm chasers leave the storm zone on short notice, as soon as their work is complete (some even before it is entirely complete). In some cases, these contractors avoid completion of any work at all.

But that’s not all you should be concerned about. Other issues include:

Storm chasing companies notoriously underpay their workers, which causes high turnover in the industry. When an entire crew decides to quit in the middle of a job, the customer is left waiting for the company to hire a new crew to complete the work (which may never happen). If new recruits do arrive, they are often untrained and unqualified.

Additionally, because the new crew isn’t local, they’ll be unfamiliar with local laws and codes, often leading to violations.

Just like their construction teams, storm chaser sales departments are often paid solely on commission. If they don’t make any sales, they don’t receive a paycheck. The employees who can’t make a living at the job quit quickly, and those who do make sales often do so because they’re incentivized to use dishonest sales tactics. Many of these sales employees may:

Plus, if your agent quits after you pay for a contract, the company will no longer have an incentive to complete the project.

That’s not the end of it. Some particularly devious storm chasing companies recognize that lack of local name negatively impacts their business. Often they won’t have a license to work in the state or aren’t registered with the Better Business Bureau. They use one deceptive loophole to sidestep these problems.

Storm chasers rent a local company’s name and business license, essentially working under their name while in the area. The storm chaser will make certain agreements with the local company about the quality of work and warranty support — but often violate these terms by the time they leave.

How to Select a Trusted, Local Montana Restoration Contractor to Handle Storm Damage at Your Home or Business

In addition to storm chasers, look for local workers that are attempting to make a quick buck without the proper licenses or experience. Instead, you’ll want to seek qualified local contractors.

Alpha Omega Pros are a local residential disaster restoration company you can trust. We can help with any of your storm-related damages, including roofs, gutters, and siding as well as water damage. Contact us today.