Safeguard Your Property From Fire Risk During Construction

In 2019, Billings firefighters toured the Alberta Bair Theater as it underwent renovations. Because the skeleton of the building was exposed, firefighters were able to see how the structure was built and relate that to how other buildings or homes can be vulnerable to blazes, especially while under construction.

During the tour, the firefighters encountered a relic. A sign mounted to the wall said, “In case of fire, cut this line”. A chain dangling from the sign had a knife at the end. In the event of a fire, an employee would cut the chain, triggering a “fire curtain” to fall and protect the audience from whatever had ignited on the stage. Obviously, that system is no longer state-of-the-art, but the idea of taking steps to mitigate fire risk, especially while a structure is under construction or undergoing renovations, is just as relevant today.

Construction and renovation projects are particularly susceptible to wreckage by flames, smoke, and soot. Whether you own a home or run a business, a blaze can severely delay your plans, cost you thousands of dollars, and put lives at risk.

Unfortunately, these tragedies are far too common. Local fire departments throughout the country responded to an estimated average of 3,480 fires in structures under construction and 2,580 fires in buildings under renovation per year from 2013 to 2017, according to the National Fire Protection Association. 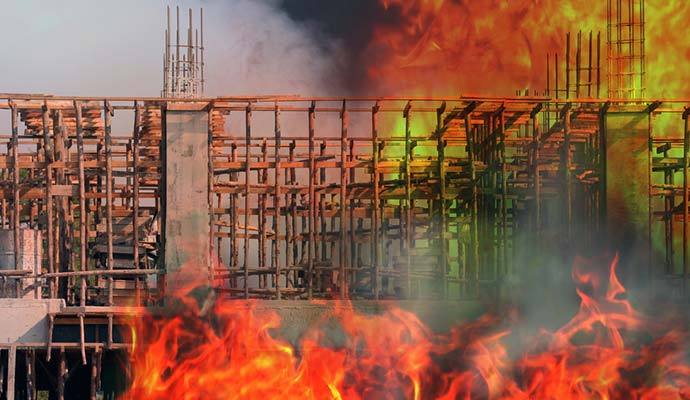 Fire Vulnerability in Structures Undergoing Renovation or Under Construction

Structures that are still under construction or undergoing renovation are nonresistant to flames for a multitude of reasons. Incomplete structures typically have more exposed wood. In addition, there are typically prevalent heat and spark sources, as well as a high fuel load. The leading factors that contribute to fires in these cases include electrical failures or malfunctions, abandoned or discarded materials or products, and heat sources that are located too close to combustible materials.

What Steps Can You Take to Safeguard Your Property From Infernal Destruction?

A fire can make an already long and expensive construction or renovation project even slower and more costly. If your home or business has been damaged by a fire, you must partner with an experienced disaster contractor to get your property and project back online as quickly and safely as possible.

Whether the damage is minimal and confined to one room or has caused massive damage to a structure, Alpha Omega Disaster Restoration can help reconstruct, cleanup, or repair your Billings area property. We will act as general contractors for the entire job. Our in-house experts specialize in their trades. We also work with local, trustworthy subcontractors to provide highly skilled craftsman service when needed.